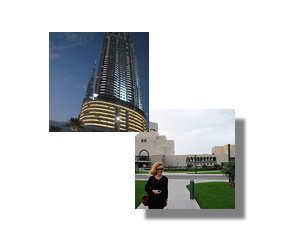 I finally arrived in Doha last night nearly 3 months after 'The Move' from Dubai to Doha got under way.
Leaving Dubai was a drama right to the end: DEWA (the power/water board) cut off the power to the unit a day earlier than requested which left me with the Prado inside the garage and a non-operating electric garage door. After trying everything I could think of I eventually had to call the the landlord who sent one his guys round.  After using a piece of 4x2 to release the door I could get the Prado out. Now both the Prado and Madame are parked under a friend's office. The cars are in the shade.  The Prado will stay there until I have my Qatar visa; when I get it we can both apply for Saudi visas so we can fly back to Dubai and then drive the Prado back to Doha.  As the drive from the UAE to Qatar involves a short transit through Saudi I cannot drive that section and also I'll be wearing abaya and hijab for the 1-2 hours we are on Saudi soil.
Back to the DEWA story: to get the refund of our deposit on the villa we have to supply a copy of the final DEWA bill with 'Paid' stamped on it to the landlord. Dewa said the bill would be ready in 1-2 working days after disconnection but by Thursday we still hadn't heard from them. I went into DEWA on Saturday but they said the bill couldn't be prepared because there was an 'information error'.  What the error was, they couldn't say and I would have to come back the following day to speak to one of the managers. So back I went on Sunday and spoke to Mr Abdullah, The Man Who Knows Things.  He told me he'd find out about the 'information error' but that the bill should be ready in an hour, inshallah. Well I've been in Dubai a while so I know what a DEWA 'inshallah' means.  It means out of sight, out of mind, if you go away they'll just forget about you.  So I got myself a coffee (surprisingly good) and sat opposite TMWKT and waited.  And waited. Until lo and behold after a mere 50 minutes the final bill was ready. Oh, and what was the 'information error'? I will never know and I wasn't going to interrupt Mr A.'s flow of good work to ask.
The landlord wanted the bill faxed to him, so I asked whether I could bring it in person and collect the refund cheque? No. As there are no fax sending facilities at DEWA the landlord's bloke suggested I 'just drive around' until I found a typing centre. Blood pressure rising at this point. 30 minutes later having attempted to get to Satwa but only succeding in becoming seriously lost in the back blocks of Deira (don't ask) I decided to head for home and find somewhere there. First stop, the Umm Ramoul Post Office where Mr Mean took pleasure in telling me that they did not have a fax. Next stop was Al Garhoud's own version of Sin Central judging by the vast array of condoms for sale, the Emarat petrol station on Marrakech St. Yes, they could send faxes and in minutes the mission was accomplished.  Plus I learnt a lot about the preferences of the male population of the local area......
Then back to John and Vicki's, I got on the phone to FlyDubai, booked a seat on the 8pm flight from Dubai to Doha and now here I am.