Music to my ears

The local supermarket in Dubai has a reasonable selection of Arabic music.  I check the rack for new additions regularly and yesterday, I found a CD in the bellydance section.  Normally I wouldn't buy it as violin music isn't much interest to me, but when I saw the title of this particular CD I knew I had to have it.  I give you: 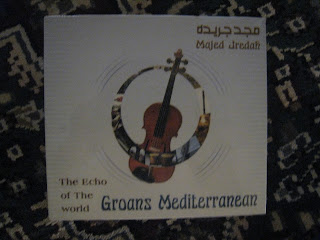 Mum and the Kids

Our old bbq has been occupied by one of the local stray cats and her three kittens. Mum Cat is very skittery and shy of humans and she hissed at me when she thought I was too close to her babies, I hissed back which made it a bit of an impasse. Anyway, Mum doesn't realise that as the bbq is right by the house, I can see her out of the lounge window. (We thought she was a bloke cat but we were seriously wrong weren't we?)

I'm back in Dubai sorting, culling and packing.  How can people accumulate so much stuff'?  We arrived in Dubai with one suitcase each but we'll need a 40 foot container (possibly two) to leave.

It seems like Sunday was the start of an official 'Everything's Tickedy-Boo in Dubai' campaign. The media has bombarded the public with positive stories; Business Bay is surging ahead, there are blokes are on the radio saying property prices have reached their lowest point and the market is bouncing back. Meanwhile, down at the shops, Deira City Centre is confident of an expanding retail market and will be building 55 new shops.  Who these potential property buyers are, where they'll come from and most interesting, why they would buy in Dubai is not explained and the commentators have obviously never heard the expression 'Once bitten, twice shy'. Dubai's reputation as a safe place for investment has been muddied by the property market implosion.  What rules there were, were shown to be woefully inadequate to deal with the fallout.  Currently there are ongoing complaints and some law suits by investors who have lost their money on developments that have been shelved for the foreseeable future.  Reputation, like virginity, is something that once lost, cannot be restored (yeh I know about the operation but you see my point?)  There would need to be a vast number of people move into Dubai to get rid of the current glut of property units, (those people won't be coming from the construction industry) and did anyone say the magic word "visa"?  Where are the jobs for these people?  It also comes as a rude shock to prospective purchasers when they find that their 'residence visa' in Dubai only lasts for 6 months at a time and then they have to leave and request a renewal. So why would they?  There are markets that welcome their investment, Malaysia for example and its "My Second Home" programme. In response to the current oversupply in Dubai developers are holding back on releasing development units.  The hotel sector is reportedly taking the biggest hit, with one example being the shelving of the Kempinski hotel on the Palm Jumeirah which will remain a shell for the next two years  Ulrich Eckhardt, Kempinski’s head of the Middle East and Africa said “I’m concerned about what I consider poor planning from those in a position to approve new hotels.  He continued, "Building permission was granted without studying “existing inventory, growth rates and future demand." (Just because you get permission to build doesn't mean you have to do it surely?  I would have thought the hotel company itself would have taken a look at the state of the market but there you go....)

With oil prices rising due to the Libyan crisis the number of international travellers is expected to fall, and let's face it, the Middle East is not currently the holiday destination of choice.
Back to the Deira City Centre expansion, Q1: How long ago did they shut their 'luxury arcade' due to lack of custom? Q2: Will the expansion take over more of the car park? Will Deira CC end up like Doha City Centre in Qatar?  Doha CC is a shopping mall almost the size of Mall of the Emirates but with the car park space of Spinneys in Jumeira. Oh yes and Frederick's of Hollywood is opening 10 shops in the Middle East this despite, and this may come as a surprise to many readers, the lingerie market here being saturated - a strange irony isn't it?

Some of the important things.

Moving from Dubai to Doha means having to start again finding all the important things. So far its looking good:

1. Sharwama man - tick.  The fine food at the Al Mattar al Qadeem branch of  'Lebanese Charwama' (that's their spelling) will do nicely thanks.

2. Juice man - tick.  Just a couple of doors down from the sharwama man.  When I walked into the juiceshop in front of me there was a cash register on an old coffee table and a group of guys sitting round on assorted chairs, some left over from long forgotten dining room suites, a couple of plastic bbq chairs and an old armchair.  There was no obvious indication of who was a customer or who worked there so I gave my order in a sort of general way to the group and then waited to see who reacted. After they got over the shock of there being a woman in the shop, everything went smoothly and one of the guys got up and went behind the counter to make the juice and the man in the armchair reached over to take my money and put it in the cash register.  Next time I'll know that the juiceshop owner sits in the best chair!

3. Gym - tick (FF at Doha City Centre). FF used to be a mixed gym like in Dubai until last year when the Doha authorities told them the sexes had to have separate areas. The gym's done a good job in making the space but the two ladies areas (cardio and weights) are now in separate parts of the gym. The female cardio area is in a sealed off corner of the main gym while the weights/machines area is inside the ladies change rooms. Females have to pass through the main gym to move between cardio and weights areas. So the local ladies come to the gym put on their workout gear then put on their abayas and sheylas to walk from the change area to the cardio area.  Once inside they take them off and do their workout then put them back on so they can pass through the main gym on their way back to the weights area. In the weights area they take off their abayas and sheylas again and continue their workout.
I've been to a gym in the Grand Hyatt hotel here.  While a ladies only gym was provided, men and women can also train together in the main part of the gym which had the most useful equipment.  This gym was ultra expensive but the facilities were top class.  They also provide a laundry service to wash members' gym gear after use and have it ready when you next come to the gym.

4. Abaya shops that sell completely outrageous, over-the-top evening gowns from racks at the back of the shop out of public view - check, check and check.

The Qatari Army is on the move... a big army ute (like a Silverado) roared out of one of entry lanes to the roundabout, it slid to a stop across 3 lanes of oncoming traffic who all had to screech to a halt like something out of a Hollywood action movie.  I was in one the lanes of traffic and I have to say I sat in stunned amazement as  a soldier hopped out of the ute and proceded to direct a convoy of Army trucks, APCs and anti aircraft guns through the roundabout. What I liked most was the truck carrying an office building and the last one in the line which carried a portaloo in desert camouflague colours.  Then the soldier jumped back into his ute and roared off down the highway in pursuit of his comrades.  Just another afternoon in Doha :-)
Posted by Meanwhile... at 10:07 pm No comments: