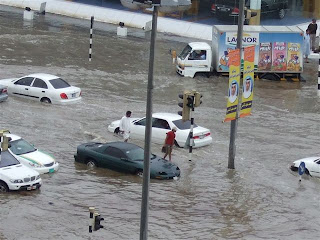 Another long weekend over, this time thanks to UAE National Day. It was Dubai Rugby 7s weekend, which I think must be the highlight of the expat year here. Sad result for me as the Kiwis went down to the Saffas in the final, the receptionist at work is from Durban and was very quick to rub it in this morning. The first day was fantastic though I never thought I would ever be sitting at a rugby game singing along to Neil Diamond songs (Sweet Caroline, dom, dom, dom....) with thousands of other people. "Hey Baby", the new disco version, is one of the tournament anthems but I reckon the La De Dahs still have the best version - "Hhhheeeelllooo" (Kiwis of a certain age will get the joke.) One of the Canadian rugby players has the best names ever, wait for it, Dave Moonlight! DAVE MOONLIGHT! Isn't that brilliant? (Sabine, I sat with Hisham and Talal in the Morgan Stanley VIP area for a while, God life’s tough.)

On Saturday, the second day of the tournament it rained and to my shock it was 24 hours of real Auckland/Sydney style rain. The drains couldn't handle the volume of water, many roads flooded, and it was cold too! The rain turned the pitch and nearly everywhere else into a mudbath and we decided to give the rugby a miss which was a good decision as the rain didn't let up for the entire day. If I’d gone out to the ground I would have needed my Drizabone and a pair of Skellegators. On Saturday everyone got soaked no matter where they were in Dubai, as nobody here has wet weather gear, I mean why would you? The only reason I own an umbrella is to keep the sun off.

I don’t have pay tv so I decided to get a free-to-air set top box which looks like a Foxtel box but picks up all the free tv stations in the region. The box costs approx $AUD80 and I now have 250 channels including channels from Iraq, Syria, Lebanon and Jordan; a channel called Huda which has 24 hour Koranic readings and lectures in English from some very interesting Koranic scholars (I think its funded by Saudi); there’s Hezbollah tv (non stop black and white footage of guys firing rocket launchers etc); an Arabic direct sales channel (ab machines, cellulite cream etc), the Turkmen channel (as in Turkmenistan, not a channel specifically for blokes from Turkey), a music channel from Sudan; my favourite Egyptian classic movies in black and white; lots of music channels including one that’s exclusively khaleegi music and dance (bliss) and most importantly, to me anyway, BBC World and Al Jazeera English.

Went to the Kiwi Ball at the Grand Hyatt last night and had a great time with about 500 other Kiwis, the occasional Aussie and some other assorted ring-ins. The 7s team was there and they did a haka. Richie McCaw was there too. There were several big video screens on the walls around the ballroom and during dinner they played a video of music/tv clips from the past, including the Toyota “Bugger” ad and Crumpy’s ad for utes. When the theme from “Country Calendar” played, the crowd almost broke into spontaneous applause. Split Enz were on the video from back the days when they wore the white face make up and within seconds all the Aucklanders on our table were reminiscing about the Buck-a-Head concerts at the Mercury Theatre. One guy’s claim to fame was that he played pool with the guys from Hello Sailor. Ah memories.

No more long weekends now until Christmas. We get Christmas Day and Boxing Day off but then because of Eid we have all the following week off.
Posted by Meanwhile... at 11:02 am No comments: