TheCaroVan's YouTube channel is no more.  The channel featured short clips of bellydancers from the Middle East and occasionally singers, usually in scenes or clips taken from old Egyptian and Lebanese movies some as far back as the 1930s.  Full movies were never uploaded.
TheCaroVan YouTube account has been terminated after receiving copyright demands from companies and copyright organisations who claimed the ownership of some of the clips and/or the accompanying music.  While some of the claims were from entities who, after a minimal amount of research proved to be non-existent, some claims and organisations were legitimate and if you were a regular visitor to TheCaroVan you would have noticed that in the past, clips has been removed in compliance.
In the end, TheCarovan account was terminated due to a take-down notice by a company in France who claims to own the copyright to the 1955 Egyptian film 'Sigarah wa Kas' (A Glass and a Cigarette) which features dancing by Samia Gamal.  Interestingly enough there is at least one other company who claims to own the worldwide copyright of this same movie.
I removed the offending clip yesterday, immediately on receiving the notice, but that wasn't good enough apparently and the account has been terminated.  As a result the channel and its research and information that more than 6,000,000 viewers had accessed, is now lost.
So, long story short, TheCaroVan is no more and I am now 'An individual whose account has been closed [is] prohibited from accessing, possessing or creating any other YouTube account.'
Ah well, as someone who lives in the Middle East, as you can imagine, we have one or two other things to worry about at the moment.....
Posted by Meanwhile... at 8:15 am No comments: 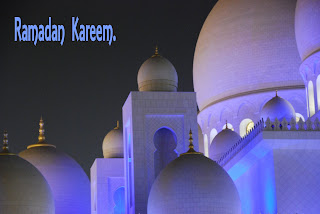 Despite the sandstorm in Riyadh, the new moon is expected to be sighted by the Moon Committee in Saudi tonight.  If this is the case, then the month of Ramadan and the fast will begin tomorrow (Wed).
Posted by Meanwhile... at 12:05 pm No comments:

What's wrong with this picture? 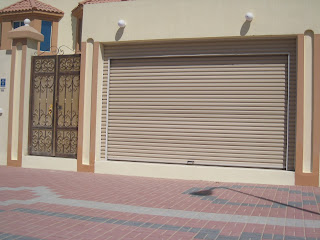 Another couple of 'only in Doha' moments. 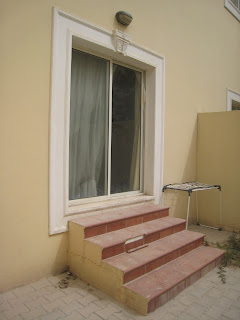 Qatar: A peaceful transfer of power.

Its official. The rumours that have been widely circulating here have proved true. Sheikh Hamad bin Khalifa al Thani, the Emir of Qatar, announced yesterday that he is stepping aside, handing power to his son Sheikh Tamim bin Hamad al Thani.  The outgoing Emir seized power from his own father in a bloodless coup 18 years ago, almost to the day.


The new Emir, Sandhurst educated Sheikh Tamim, is the second son of Sheikh Hamad and his second wife Sheikha Moza having replaced his elder brother Sheikh Jassim as Heir Apparent in 2003.


His mother Sheikha Moza (yes, 'Moza' means banana in English) currently plays a very active role in public affairs here though whether that role will continue is as yet unknown. The transfer of power comes into effect immediately and today has been a public holiday, though the majority of the population did not know they had a day off until late last night.
This morning Sheikh Hamad addressed the public on tv and after that Sheikh Tamim, the new Emir, received a long line of representatives of the families, clans and tribes of Qatar who'd come to swear allegiance. The ceremony was shown in its entirety on local tv and will continue later this afternoon and again tomorrow.

The 'marriage 411' as a friend calls it is that the new Emir was born in 1980 and has two wives.  He married his first wife, Sheikha Jawaher bint Hamad bin Suhaim al-Thani, who's also his second cousin, when he was 18 and the couple has 4 children. He married his second wife, Anoud bint Mana Al-Hajri, in 2009 and they have two children. (Though the Arabic paper here says his first wife has 3 children and his second has 1.)
Posted by Meanwhile... at 7:39 am No comments:

Emir of Qatar hands power to his son.

In what must be a first for the region, the Emir of Qatar has peacefully handed over power to his son, Sheikh Tamim.  Exactly when this transition will take place has yet to be announced.
Sheikh Hamad bin Khalifa al Thani announces handover of power to Heir Apparent

The weekend in Saudi: all change!

Finally! Saudi has changed from a Thursday/Friday weekend to Friday/Saturday weekend which brings it into line with the rest of the GCC. King Abdullah of Saudi issued the decree following a recommendation by the Kingdom's Shura Council.
Many Western companies have branches in the Kingdom and the fact that the Saudi offices were only open at the same time as Western offices on Monday, Tuesday and Wednesday could be so frustrating. The change in Saudi comes into effect from next weekend. Oman also changed to the Friday/Saturday weekend recently.
Here in the Gulf, the weekends are reversed to what there is in the West where Saturday is for shopping, going out etc and Sunday is quiet. Here, Friday is quiet (you could fire a cannon down our street on Friday morning and not hit anyone) and Saturday is busy with families in the malls etc.
Posted by Meanwhile... at 8:23 am No comments:

18th December is Qatar's National Day and as part of the celebrations many family/tribal groups set up huge tent majlis around Doha. The land on which the tent's erected is allocated by the government and the various families use their allocated land for weddings or important occasions. Most of the time the land looks like bare, rocky wasteland and you'll see these seemingly abandoned areas all over Doha.  However, everything changes when there's a function and the area is transformed into a tent palace. Huge marquees spring up seemingly overnight, carpets are laid on the ground, huge generators kick into life to provide electricity, sound systems are set up, lighting's installed and seating for the visitors is brought in. Often, two of these tents are erected, one for men and one for women. For the national day celebration most of the families had erected long tents with large carpeted areas at the front surrounded by chairs.  Some had camels in pens to one side for the younger guests to ride.

We were guests at one family majlis and we sat in two of the plush armchairs that lined the inside of the tent.  There were also seats lining the entire outside area as well, there must have been hundreds. The tent area, the area outside and the walkway to the public footpath was covered in carpets, you'll see them in the video.

Inside the tent we drank cardoman coffee and watched the dancing, the drummers and the poets. The dance being performed is the ardah, the traditional male dance in the Gulf region. Two lines of singers face each other and are led by a poet who moves between the lines directing the next lyrics to be sung. If its a 'performance' these singers are the only people moving, howevr in a community setting such as National Day, everyone of all ages joins in most carrying their sword, singing along and moving in an anti-clockwise circle on the carpet while the drumming group stand in the area between the two lines of singers.  In Qatar and Saudi the dancers traditionally carry swords, I'm not sure about Bahrain but I assume it would be similar. Over in the Emirates the dance is called 'Al Yolla' or one of the many variations on the name.  The Emirati singers carry canes mostly but I've also seen swords used occasionally. In the Emirates and also in Oman, there are often two or three young boys or teenagers moving up and down in the area between the lines of singers expertly tossing swords or imitation rifles. While  I've seen this here in Qatar, it doesn't seem to be a regular part of the dance here.

This evening, while the adults had a break, the little boys had their chance to dance. They all seemed to be under the age of 10, outrageously cute in their celebratory dishdashs. Some enjoyed a chat and a play sword fight with their mates, others were serious, they were there to practice hard.  The very young ones clutched their fathers' hands and walked around earnestly clutching their swords.  So, as you'll see, some of the dads joined in with their sons showing them the steps and the sword movements.

Thank you to the family for their hospitality.
Posted by Meanwhile... at 9:35 am No comments: