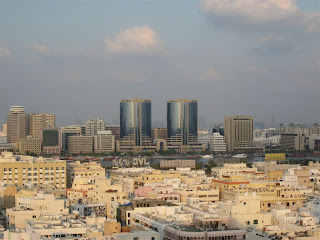 I love business class! I flew with Emirates who provide free transport to the airport for passengers flying business class (that’s me, yay). On Thursday evening I was picked up from work and taken to Sydney airport in a brand new BMW complete with leather upholstery and ‘new car smell’. Baggage allowance in BC is 32kg and my bag weighed in at a mere 31.7kg, I was packing for 6 months after all. My backpack weighed a ton too but I got it on as hand luggage. Strangely enough Australian Customs confiscated the Allen key I had in my handbag. Surely everybody carries an Allen key? What did they think I was going to do, attempt to unscrew the wings or maybe start assembling IKEA furniture in a threatening manner?

The flight to Dubai takes 14 hours and left at about 9:25pm, smooth flying the whole way. The seats in BC, which have a built in massage feature, lie almost flat so I was able to get a few hours sleep and aside from sitting next to a gent with a supersonic snore it was a very pleasant flight. The Snorer woke me and other people nearby several times. At around 3am I caught the eye of a man in the seat across the aisle who glared at The Snorer and made strangling motions with his hands. Having listened to several hours of snore, snore…silence…snore, gag, choke, snore….yes it was a temptation. The flight landed in Dubai at 5:45am where the temperature was already 35! Emirates provided transport from Dubai airport to Sabine and Hisham’s place, just a Volvo wagon this time. Everything here is covered with a fine layer of dust which is the result of a sandstorm somewhere, the cloud of dust was really thick when the plane arrived and has remained all day.

This morning S&H and I went out for brunch at Madinat Jumeirah. This afternoon I did my usual trick of collapsing on their sofa for a few hours until the 4pm call to prayer from the mosque across the road.

Tomorrow we shop and in the evening I’m going with S&H to a party at the Meridien Mina Seyaha. Dress Code: “Dress to impress”!!! Woo-hoo, an excuse to buy something “impressive” tomorrow (like I needed an excuse??)
Posted by Meanwhile... at 9:50 am No comments: